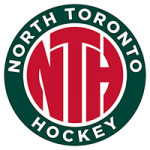 hockey is more than just a game 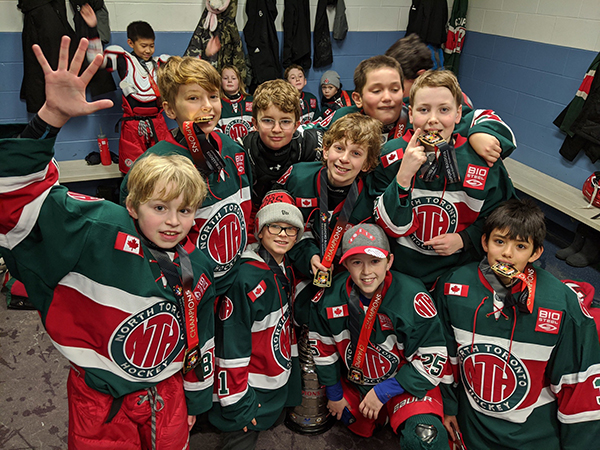 “I skate to where the puck is going to be, not where it has been.”
–Wayne Gretzky

Your home for hockey!

With approximately 1300 families participating in our programs, the North Toronto Hockey Association has deep and important roots in our midtown district. Through sport, we celebrate the lessons of teamwork and leadership while reaching out to the rest of the city and beyond.

Our mission is to provide the youth of our community with a safe, fun and inclusive environment in which to learn, play and compete in ice hockey while promoting community bonds and a life-long love of hockey and participation in sport.

All of our programming is guided by the principles of integrity, inclusiveness, sportsmanship, honesty, respect, compassion, and fairness.

A Message from Rich Brewda, President

For the past 20 years, I have been involved in minor hockey as a volunteer in various capacities. The first 6 years I was coaching for other clubs, and then the past 14 years I have been with North Toronto as a GTHL coach, Board Member, General Manager, Vice-President and now President. Once I joined NT, I could feel the difference, I felt like I was at home. This is how we want everyone to feel when they join our club, whether you’re a player, coach, parent, convener, official or just a fan. We want you to feel like you are part of the family and for this to be “Your Home for Hockey”.

Over the last 57 years, our hockey club has been woven into the cloth of the North Toronto community by providing hockey programming for players from 4-18 years old. We offer one of the most comprehensive programs available to minor hockey players anywhere in the country. None of this programming would be possible without the help of all of our amazing volunteers who work countless hours to make all of this happen.

This year we saw how much hockey meant to our community with over 1000 Learn To Play and House League players that registered for a season that had so much uncertainty around it. In addition to the 1000 LTP & HL players, we had another approximately 300+ “A” and “AA” GTHL players register as well. Thus, making us one of the largest hockey clubs with the most passionate and committed group of families. I want to thank you for putting your trust in our hockey club. We will not let you down!

For those that I have not yet met, I hope to meet you in person when we kick off off our 57th season this fall, and in the meantime, my door is always open, and happy to talk hockey anytime! My contact information is below. Feel free to reach out to me anytime.

The NTHA is governed by a volunteer Board of Directors, consisting of a President, Vice-President, Past-President, Secretary, Treasurer and Members-at-Large responsible for administering all the operations of the hockey association. Directors serve terms of 1 year and are elected at the Annual General Meeting usually held in June.

Please review our Code of Conduct to ensure compliance for both you and your child.

We take the safety of our community seriously. Please review our policies on discipline and dispute resolution.

Ties to the past 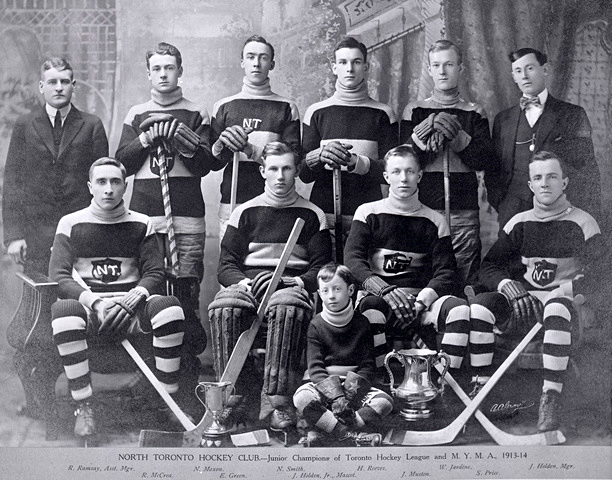 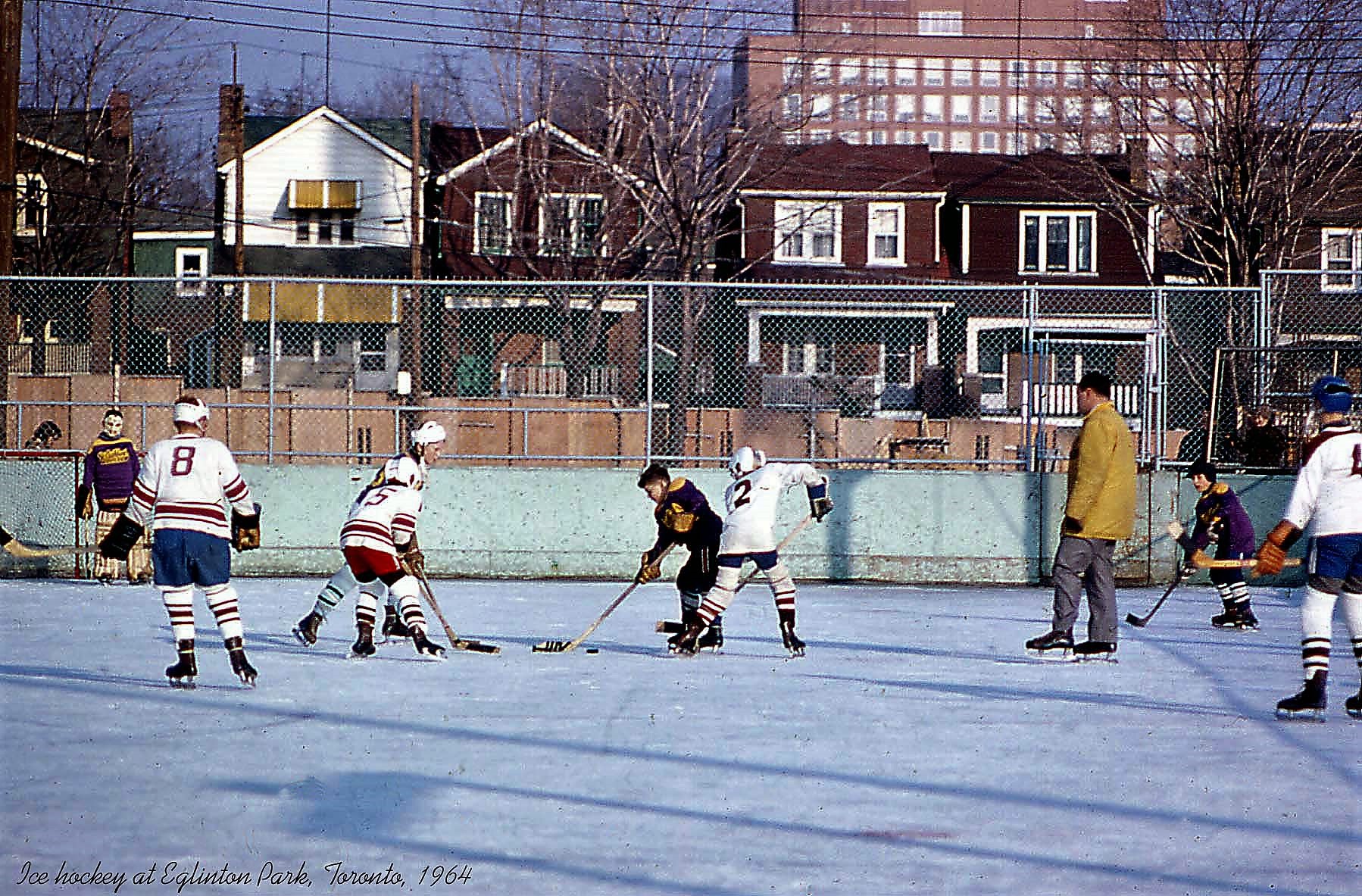 1964, before the indoor arena was built.

The history of North Toronto hockey goes back over a hundred years when frozen ponds and leather gloves were state of the art. In the top photo you can see members of a North Toronto junior team that won the 1914 championship of the Toronto Hockey League (a very early precursor to the modern Greater Toronto Hockey League). For decades, local youth and young adults participated in the THL where teams were formed and financed organically according to the availability of players and as much as world events — such as two World Wars and the Depression –would allow.

The massive baby boom and economic expansion which followed World War II greatly accelerated the uptake of hockey as all those new children and families needed to be kept busy! In 1965 a group of neighbourhood dads were inspired by the construction of the gleaming North Toronto Memorial Arena and knew that this was going to be the community’s new home for hockey. They formally established what is now known as the North Toronto Hockey Association and then, as now, the largest single program was House League. Over the years a very strong competitive program evolved and many NT teams have since won championships in both city and provincial competitions.

One of the early luminaries at North Toronto was John Gardner, who played at NT as a child and then volunteered as an adult. In 1980, John went on became the youngest President of the MTHL (the latest precursor to the GTHL) and served there for an incredible 35 years. Remarkably, John had no children of his own but he was passionate about the sport of hockey and dedicated his life to improving the game for everyone. The large function room at North Toronto Memorial Arena is named in his memory.

In 1985, the NTHA officially incorporated with the Province of Ontario as a registered non-profit organization and established a formal governance structure including an elected Board of Directors and audited financial reporting. It was around this time that the distinctive round button logo and the unmistakable red-green-white colour scheme was also formalized.

Through the 1990s and up to today, the NTHA has continued to grow the size and scope of its programming and today ranks as one of the largest and most complete minor hockey associations in the entire country, with 1,300 players enrolled in Learn to Play House League and 36 competitive “travel” teams across all age divisions. This feat is a real testament to the commitment and talent of local community because the NTHA is and always has been managed and operated by volunteers.

Since 1965, over 30,000 boys and girls have played for the Red, Green and White and many continue to return as adults to volunteer and to enroll their children in hockey.

And in 2018, one such player even returned to show off his Stanley Cup and share it with his first home for hockey. Tom Wilson of the Washington Capitals started out as a Tyke in House League and played half a dozen seasons for NT competitive teams before moving on to the very highest levels of the sport. When asked about his time spent at North Toronto, Tom said: “This is the arena where I fell in love with the game of hockey. This is where I spent every day hoping I’d make it to the NHL. Walking through the doors you get all the memories of being a kid here.”

After 100 years, it is clear that the spirit of hockey in North Toronto has never been stronger or more vibrant. And although not every player may end up winning a Stanley Cup, the valuable memories and lessons and friendships gained at North Toronto will last a lifetime.

The Green Wall of Honour

The Green Wall serves as a lasting tribute to those exceptional individuals who played the game or helped to deliver the programs here at NT. It is conveniently located beside the banquet room entrance on the way to the snack bar. Come by to have a look next time you’re at the arena.

Volunteer of the Year

The NTHA has been serving the North Toronto neighbourhood and surrounding communities since 1965. Our mission is to provide a safe and fun environment to learn, play and compete in youth hockey. The Green Wall of Honour serves as a lasting tribute to those exceptional individuals who played the game at NT or helped to deliver the programs here at NT.

The Green Jersey Award is awarded to a player that has played NT Select and/or NT GTHL for at least 6 consecutive seasons culminating in their “retirement”. Or a player who plays Minor Atom to Midget and missed 1 year of Competitive, but remained at NTHA playing House League during that year (7 competitive years of the preceding 8).

The Alumni Club Award is awarded to a player (who does not qualify for the Green Jersey Award) who played a minimum of 8 consecutive years in Houseleague, or a combination of NTHA Houseleague, Select, and/or GTHL. This period culminated in their “retirement”

For information on the volunteer of the year award and lifetime achievement award, please see above.

If you are, or you know someone who may be eligible, please have them contact Greenwall@NThockey.ca. Please provide as much information in your email as possible. Please make sure to include the following: Person’s name, birth year, what level they played at (HL, Select or GTHL), which award they are eligible for and your last coach’s name. All eligible applicants will be reviewed by the NTHA Board of Directors to verify qualifications 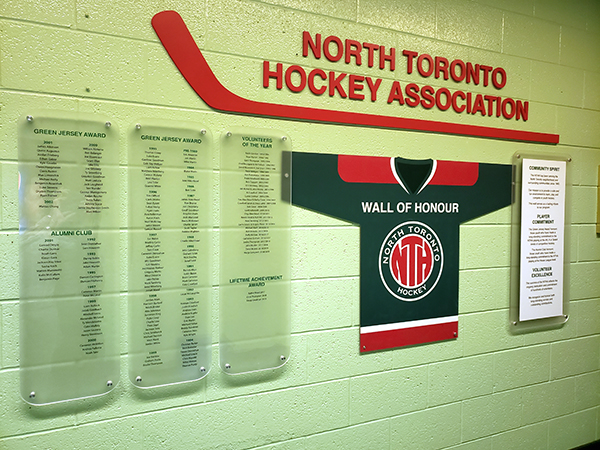 North Toronto Hockey Association is grateful for the support of our sponsors. As a volunteer based not-for-profit organization we rely on our sponsors to help us provide high quality hockey programs to the youth of our community. For those unable to volunteer, sponsorship is an effective way to help out and advertise/promote your company or workplace.

We are proud to recognize our sponsors for 2021-22. This year more than ever, with increasing costs we are so grateful for their support so we are able to provide a safe, fun and inclusive environment in which to learn, play and compete in ice hockey while promoting community bonds and a life-long love of hockey.

See all our sponsors.

We’d love to hear from you